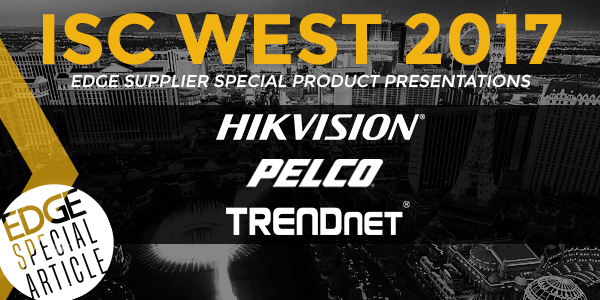 While we have a myriad of suppliers out on the Las Vegas show floor at ISC West this week, three suppliers—Hikvision, Pelco and TRENDnet—are set to reveal some exciting new products that’s sure to enhance the world of surveillance and network solutions.

A passionate supplier of security cameras, Hikvision sent out a tweet earlier this morning to reveal that they’re going to show their Deep Learning Technology at the show. While there aren’t any concrete details on whether or not this Deep Learning Technology is actually a new product or a software to coincide with any of their existing camera products, we’re sure that it has something to do with introducing a new mode of security while doing away with the traditional algorithms used in most security cameras today.

Want to find out for sure? We’re curious, too. If you’re on the ISC 2017 show floor this week, be sure to stop by their booth #18037. They also have a comprehensive schedule of all the things they’ve got planned this week. You can check that out here.

Pelco, another supplier of top-notch IP video cameras and security systems, has planned for two IP cameras take the spotlight at the ISC West show floor.

Pelco’s ExSite™ Enhanced HD is made with the chemical and marine industries in mind. The ExSite Enhanced sleek and metal housing is perfect for providing imaging and video while under harsh conditions and temperatures. The camera is also able to capture images from multiple sides and angles thanks to its pan-tilt drive system, however, the system is currently working its way to being patented.

The Sarix™ Enhanced Range with SureVision™ 3.0 is the other Pelco product making its debut at ISC West today. At their booth, you’ll be sure to hear Pelco speak on the camera’s knack for providing users with high-end image quality and accuracy despite even the brightest or darkest of lighting conditions.

You’re sure to find the ExSite Enhanced, the Sarix SureVision and batch of other products at Pelco’s booth on the ISC West show floor. Just look for booth #10037.

In addition to the AC 1200, TRENDnet is also set to showcase the N300 Wireless Controller Kit as well as the Wireless LAN Controller. You can find out all about TRENDnet’s upcoming products and its specifications at their ISC West booth. Just look for booth #20124.

Want to know exactly where to find Hikvision, Pelco and TRENDnet products? You can find your local distributors by looking at the Edge Supplier Map.